Where is the Tramway seawall and the shared path?
Why do we need a new seawall?
Why do we need a new shared path?
What upgrade works will be undertaken?
When will the works commence and how long will it take?
Can I still use the path during works?
Will there be much noise during construction?
Will the centre line remain on the path following works?
What alternative access paths will be established?
What will happen to the major events that utilise the Tramway?
How will the heritage of the Tramway be preserved?
What is the history of the Tramway alignment and seawall?
How can I have my say?
What happens next?

Where is the Tramway seawall and the shared path?

The Tramway seawall is the lower section of rock and concrete wall that begins at The Cutting and runs south to the Continental Pool. The Tramway runs along past the Gentleman’s Ocean Pool.
The Tramway Shared Path is the remaining section of the original path that starts just south of the North Beach Pavilion and ends at Belmore Basin. 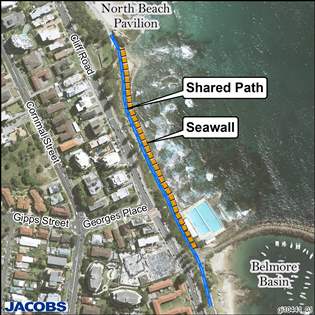 Why do we need a new seawall?

The aging seawall is becoming increasingly unstable and unsafe due to the harsh environment. The installation of a new seawall designed for the ocean conditions will provide a more permanent, safer solution for the community.

Why do we need a new shared path?

The condition of the original shared path has deteriorated overtime and is in need of repair. The Tramway Seawall upgrade provides an opportunity to consider a modified design of the shared path to enhance the safety and amenity of the popular foreshore location.

What upgrade works will be undertaken?

The proposed works will involve installation of a new seawall between The Cutting at North Wollongong and Continental Pool. The Tramway shared path will be upgraded, with sections of the path widened, resurfaced and new paving laid. In addition, seating, fencing, lighting and public art installations will be strategically placed between North Beach Pavilion and Belmore Basin.

When will the works commence and how long will it take?

The works are expected to commence in February 2017 and will be completed by mid 2018. The Tramway seawall is over 300m in length and will be the longest stretch of seawall to be upgraded by Council. The scale of these works, working environment on the rock shelf and unpredictable weather, ocean and tidal conditions require many months of favourable conditions to complete the upgrade.

Can I still use the path during works?

There will be no access to the Tramway shared path and Gentleman’s Ocean Pool for the duration of the works. Council acknowledges that this will be inconvenient for those who regularly use this facility and the pathway, but we ask for your patience while these essential works are completed. The Continental Pool will remain open with access via a temporary access from Cliff Road. Disability access to the Continental Pool will be via the Belmore Basin entrance of the shared path and will be subject to traffic control.

Will there be much noise during construction?

These works require specialised machinery to dig into the marine environment. Council will be undertaking test excavations along the seawall in mid-2016 with this equipment. Noise and vibration monitoring will be carried out at this time to identify potential impacts on residents prior to works commencing.

Will the centre line remain on the path following works?

No. The Blue Mile Tramway shared path caters for pedestrians and cyclists. The design for the path upgrade considers the shared use of this popular location.  To encourage mixed use activity, the centre line that currently divides the tramway path will not be replaced following the upgrade. 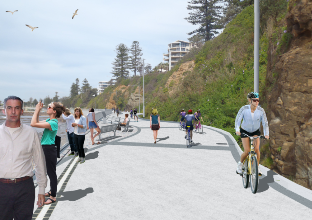 During works, pedestrians and cyclists will be directed to use the Cliff Road pathway and existing cycle lane as an alternative while the tramway seawall and shared path is under construction.

What will happen to the major events that utilise the Tramway?

Council is working closely with local event providers to devise alternatives for major activities and events scheduled in this area during the works.

How will the heritage of the Tramway be preserved?

The Heritage Significance of the Tramway has been carefully considered through the design process in recognition of the State Heritage Values attached to the site. The installation of the new wall will be constructed where possible, without disturbing the original seawall, with the original stone wall to be encased behind the new wall. This will conserve elements of the original Tramway construction. Council has also undertaken a photographic recording of the original wall to ensure that the history of its construction is documented for future generations.
The Design of the new path upgrade include continuation of the paving pattern (see inset below) used along the Blue Mile, interpreting the alignment of the original tram lines and the alignment of the old seawall. This feature will be supported by Interpretive signage and public art which will interpret and reflect on the history of the area. 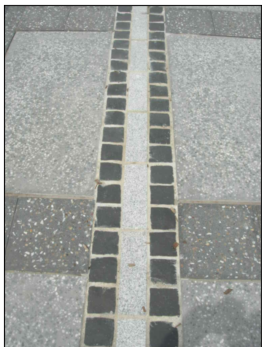 What is the history of the Tramway alignment and seawall?

The Mount Pleasant Colliery Tramway was originally constructed in 1862 and provided for the passage of Coal from above the Wollongong University Site to Wollongong Harbour. The line initially carried horse drawn carriages on a narrow gauge line, but was widened around 1880 to accommodate locomotives. The section of the old tramway between North Beach and Wollongong Harbour was partially cut into the rock, but also included the construction of a drystone retaining wall to support the tramway above and to provide protection to the forces of the Ocean. The line operated into the 1920’s but due to the great depression fell into disuse. In 1937 Mount Pleasant Colliery was purchased by Australian Iron and Steel, and as they had linked the Mine to the Mount Keira Mine, they no longer required the Mount Pleasant Line. The tramway land east of the Government Railway was subsequently handed to Wollongong Council in 1938. Since that time, the old tramway alignment has served as a convenient access path to the Gentlemen’s Baths and Continental Pools, as well as a convenient and scenic walk between North Wollongong Beach and Wollongong Harbour.
During the life of the Tramline, and since it’s closure and use as a pedestrian link,  the drystone wall came under regular attack during storm events. As a result the wall has been repaired and altered in various sections over many years, and now includes variable sections of concrete wall, remnant sections of stone walling with and without concrete mortar, as well as sections that have been shot-creted.
top of the page

How can I have my say?

The easiest way to provide your feedback on the Blue Mile Tramway Seawall and Shared Path upgrade is to complete an online form on Council’s website or collect a hardcopy from Wollongong Library. Talk to Council staff and view the designs at one of the on-site kiosks on the grassed area south of North Beach Pavilion, North Wollongong:
Visit www.wollongong.nsw.gov.au
Email engagement@wollongong.nsw.gov.au
Post: Community Engagement, Wollongong City Council, Locked Bag 8821, Wollongong DC 2500
top of the page

The feedback from the community will be included in a report informing the final design. Updates will be available on Council’s website.